Stock markets have been around a long time, and historically, markets demonstrate some well-defined patterns. At some levels of averaging, one is even tempted to call the long-term market “predictable.” I use statistical analysis to reduce more than 100 years of market data to a simple mathematical model. I’ve sought to identify the important patterns and examine their significance. Understanding the cycles and trends of “markets past” should allow you to become comfortable with the market.

Prices do not stay in line with value, and that is precisely what makes a stock market. Sometimes they are too high and sometimes they are too low, but they do swing around value and—over the very long haul—prices will average out to value. Price is simply a number upon which buyer and seller agree. Value is what a thing is worth. Over the very long haul, value will be recognized.

I use the Standard & Poor’s 500 stock index for my model. Although this index measures high-capitalization stocks, it is value weighted and it does sample a reasonable fraction of the entire market. Data exist to trace the S&P 500 average back into the past century.

Figure 1, part a, is a 100-year plot of this average, which I plotted on a semilogarithmic format. The plot is the actual monthly average of all daily closings for the 1,200 months from 1885 to 1985.

Now, 100 years is a very long time. A lot happens in 100 years: inflation and deflation. To give this plot meaning, I adjusted for inflation and deflation using the consumer price index (CPI), a good measurement of inflation. I adjusted the 100-year price curve to reflect a constant valued dollar by dividing the plot of Figure 1, part a, by the plot of Figure 1, part b, producing Figure 1, part c. We should study this plot, because it does show us some useful and interesting patterns.

Prices do not stay in line with value, and that is precisely what makes a stock market.

The down portions of these long-term cycles correspond to periods of increasing inflation. The up portions of the cycle correspond to periods of decreasing inflation or to periods when inflation is steady at some moderate value. The cycle’s current length is 33 years. Good data on the early years of the U.S. stock market is hard to come by, but some history indicates these cycles have been lengthening over the years in a somewhat constant manner. The level of sophistication of communications and the number of market participants have been steadily increasing over the years. The portion of our economy represented by publicly traded stocks has also grown continuously. Life spans have been increasing. The length of this cycle is the magnitude of a generation. The length is comparable to the length of a career of investing, and it is about the length of time needed for lessons to be learned and then forgotten. Perhaps this is what is needed to repeat the cycle—a new generation of buyers and sellers of stock.

I assume that the midpoints of these cycles approximates value. This is the long straight line drawn through the cycles in Figure 1, part c. The line demonstrates an annual growth rate of 1.6%. This is the rate of real value growth of stocks.

Such a basic number should be confirmable. Figure 2 is a plot of the Standard & Poor’s 500 earnings over the most recent up-down cycle (1949-82). Now, earnings, or nominal earnings, or earnings capability are the most commonly accepted gauges of value. To use real earnings growth as a measure of value growth cannot be a major error. In this figure I plotted earnings and real earnings and then imposed regression lines over the two market phases. During the down market, the dollar growth is greatest, but when this is translated into real earnings, the growth rate becomes very small (0.7%). During inflationary periods, prices increase and profits do as well, but not enough to make up for the inflation. The real annualized earnings increase is 2.3% during the up market phase and 0.7% during the down market phase. Over the complete market cycle, the average growth rate is 1.6%— exactly the growth rate shown in the 100-year plot shown in Figure 1, part c.

Of major importance in the long-term market is a second cycle pattern, known as the four-year cycle. Attempts have been made to tie this cycle to many other events such as the Presidential term or the business cycle, but none of these seems satisfactory. Figure 3 shows the four-year cycle during the up phase of the most recent 33-year cycle (1949-82). The genera trend is that of a series of upward steps—usually three advancing years and then about one year of correction. This pattern gives stability and order to the progression of prices. When the pattern is not completed by the downward correction, it is time to become concerned. This is always the signal for a major disruption.

The stock market model I’ve developed is primarily based on these three characteristics: the value line, the 33-year cycle and the four-year staircase. These are shown in simplistic form in Figure 4.

The shape of the four-year “step” is important. As we go up the staircase, corrections become deeper with each step on an inflation-adjusted basis. Eventually, the correction exceeds the rise. This, of course, causes the trendline to turn downward, beginning the down phase.

In addition, note in Figure 4 that the preceding down phase has pressed prices far below the value line. The series of stairsteps eventually brings prices far above value. This is the market’s trademark. Eventually, all movements become excessive. Likewise, the resulting down phase will carry prices to the undervalued extreme.

Our next task will be to assemble past market data sufficient to describe the parameters of Figure 4. In the process, we will develop techniques for applying the model to answer those questions that daily confront any participant in the market.

James G. Arnold is a retired aerospace engineer who combines engineering with 35 years of investing experience in his financial analyses.

FIGURE 1a The S&P 500 Index is plotted over 100 years on a semilogarithmic format. The plot is the actual monthly average of all day closings from 1885 to 1985. 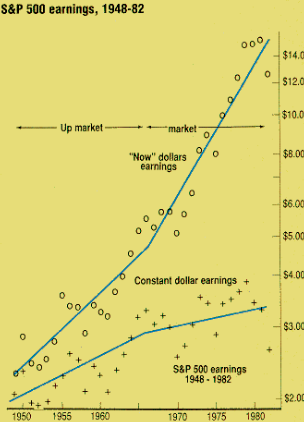 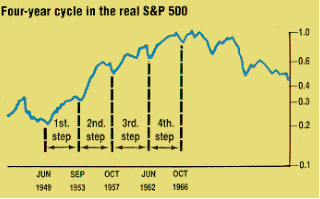